The Master’s Program in Education at the Universidade Cidade de São Paulo – UNICID is recommended and approved by MEC Ordinance No. 3,949 of 12/30/2002, published in D.O.U of 12/31/2002. The area of concentration, has eighteen years of existence, and maintains in its Pedagogical Project the references that guide its training proposal. Assuming research as an articulating axis of the plans and actions of teachers and students, it develops its curricular proposal contemplating the knowledge accumulated in the Education Area, in the light of the debates and challenges that emerge in the present time, comparing diverse dimensions of local, national and international contexts.

Both research and teaching and extension are embedded in a social perspective, which translates into the commitment to broaden the understanding and the search for alternatives in facing issues that are imposed on the field of Education.

The Master´s Program in Education is part of the Universidade Cidade de São Paulo – UNICID, a private institution created in 1972, located in the city of São Paulo, a metropolis with an estimated population of almost 12 million inhabitants.

UNICID is located in the East Zone of São Paulo, one of the largest and most populous regions of the city, with about 4 million inhabitants. Based on the population estimate, published by IBGE (Brazilian Institute of Geography and Statistics) in 2015, if the East Zone were a municipality, it would be the third largest in the country, behind only São Paulo with 11.9 million inhabitants and Rio de Janeiro (6, 5 million). Followed by cities like Salvador (2.9 million), Brasilia (2.9 million) and Fortaleza (2.6 million).

From this perspective, the East Zone can be considered a city within the city of São Paulo, with a significant growth potential. For a long time, it was considered as a dormitory region, because it sheltered inhabitants who, for the most part, moved to work in other regions of the city. Recently, the Municipality of São Paulo, through the Fiscal Incentives Program for Service Providers of the Eastern Zone, established in Municipal Law 15,931 / 2013, has been promoting the development of the region, based on the installation of different companies aiming to promote the Generation of new jobs.

The educational demands in this region are attended by numerous public and private institutions. The East Zone has five (05) Teaching Directorates, managed by the State Department of Education, forming a network of education with 489 state schools and 426 individuals, making a total of 915 units. In addition to the state and private network, the Eastern Zone also has the municipal education network that provides services through four (04) Regional Education Boards under the supervision of the Municipal Department of Education of the City of São Paulo.

Since its inception, UNICID has attended courses in the areas of Health and Exact and Human Sciences, and has been responding to the demands of training of Education Professionals in the municipalities of São Paulo, with special emphasis on Undergraduate Programs (History, Pedagogy, Languages, Biological Sciences, Mathematics and Physical Education).

The Master´s Program in Education has been in existence for 14 years and has been consolidated as a research, teaching and extension center, being the only Post-Graduate Program in Education offered in the East Zone of the city. It develops its curricular proposal contemplating the knowledge accumulated in the Education Area, in the light of the debates and challenges that emerge in the present time, comparing diverse dimensions of local, national and international contexts. Both research and extension are developed in a social perspective, which translates into the commitment to broaden the understanding and the search for alternatives in facing issues that are imposed in the field of Education.

It should be noted that in the last three-year evaluation the Program had its grade increased from 3 to 4, which attests to the recognition by the Education Area Evaluation Committee of the Program´s commitment to improve and consolidate the work being carried out.

The Master of Education Program of the UNICID has as its education concentration area and assumes research as an articulating axis of the plans and actions of teachers and students. It is organized through two Research Lines: Subjects Training and Learning and Public Education Policies that congregate projects, disciplines and programmed activities.

The Program’s objectives are:

– To train researchers capable of contributing to the process of production and dissemination of knowledge in Education;

– To train professionals qualified for teaching in Higher Education;

– To train professionals capable of understanding and intervening in complex educational scenarios, with a view to subsidizing, in particular, public policies in the area of Education.

Combine your talent with our quality and competence. 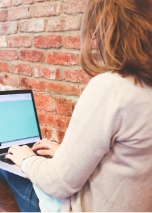